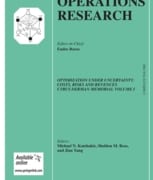 There is significant value in the data collected by satellites during and after a natural disaster. The current operating paradigm in practice is for satellites to passively collect data when they happen to fly over a disaster location. Conversely, this article considers the alternative approach of actively maneuvering satellites to fly directly overhead of the disaster site on a routine basis. Toward this end, we seek to compute a satellite constellation design that minimizes the expected maneuver costs for monitoring an unknown forest fire. In this article, we present a 2‐stage stochastic programing model for this problem as well as a accelerated L‐shaped decomposition approach. A comparison between our approach and the current operating paradigm indicates that our solution provides longer duration data collections and a greater number of data collections. Analysis also shows that our proposed solution is robust over a wide array of scenarios.